Happy birthday to Frankie Manning, who would have been 97 today.

H/t Swifty for the link to this new documentary about Frankie.
Posted by James at 9:24 AM No comments:

fodder for a charleston choreography

Thank you so much for your great blog! I'm wanting to choreograph a girls solo Charleston routine, but I've kind of hit a wall in terms of finding a song. I like Yam Brown by Bob Hunt's Duke Elington Orchestra, but I'm just not sure. Do you have any recommendations for a 2-3 min. charleston-ish song?

That recording of Yam Brown is really good--great janky feel from the banjo, great Bubber Miley-style trumpet solo at the start. The thing that makes this track really good for a choreography is all of the changes--it shifts mood several times, as if different characters were talking to each other.
A while back, my friend & sometime co-conspirator Jenna choreographed a fantastic routine to a recording of Shake That Thing by Vince Giordano's Nighthawks (check it out). What makes it so engaging is how she used the different voices in the piece as inspiration to create different characters in the dance--she and her troupe even have names for some of the characters. Without that sort of texture in the music, I think it is much harder to hold an audience's attention for 3 minutes. 2 minutes maybe, but 3 no. So Yam Brown is really good in this respect.
You might check out other Duke Ellington tunes like Demi-Tasse and Downtown Uproar, both off The Duke's Men: Small Group Recordings, Vol. 1. You might not be interested, but I would really like to see someone do a routine (partnered or solo) to the version of Caravan on the same album. One of my favorite Ellington compositions.
Here are some other suggestions:
In terms of contemporary bands, you might check out these:
Picking a song for a choreo is a little bit like picking someone to go with on a two week long camping trip in the back country. The most important thing is definitely finding a tune that you find fun & interesting, because you'll be listening to it a LOT. In fact, you'll probably be sick of it by the time you've got it choreographed and taught to your girls. Don't worry about that though--even if you're sick of it for a while, you'll come back sooner or later and make friends again, and be glad that you took the trip together. Whatever you pick, let me know how it goes, and send video once you've performed it. Good luck!
P.S. If you're having trouble finding a song that's the right length (or just slightly too fast), you can always trim it down. If you're not familiar with sound editing, have a look at Audacity, a software program for editing digital sound. It's free, easy to use, and has lots of fancy features.
Posted by James at 7:55 PM 1 comment:

As I mentioned, It's been about two months since I was last out dancing, so as you can imagine, I was pretty excited to get out of the house and DJ at Big City Swing. We had a crowd full of fresh new faces, which explains certain of my track choices below--yes, I played Zoot Suit Riot, and the crowd LOVED it. Early in the evening, I had some problems with JRMC (version 15) crashing on me and ended up having to DJ straight from iTunes, with no preview capability. That made for a little bit of a rough night, and also led to some sound quality issues. Here's my set (plus the usual BPM sparkline and frequency distribution):
Posted by James at 12:00 PM No comments:

Been busy with other things

I realized that I haven't shared the news with all of my readers (meaning the three of you, besides my wife, who knows the news)...I've been a bit busy lately. Specifically, I've been DJing only for a very specific audience, and dancing a lot with one particular girl. 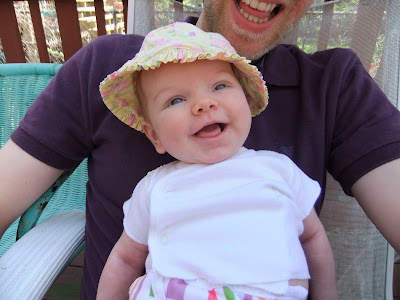 She's 6 weeks old now and rather fond of Django Reinhardt. Last Friday was the first night I went out dancing (and got to DJ) since she was born. I'll post my set-list from that soon.
Posted by James at 8:43 PM No comments:

On a tip from Swifty, I learned that Amazon has about 400 jazz albums on sale for $5 a pop during May. Most of it is stuff I'm not terribly interested in, but there's definitely some good music available there. Here are the two that I just bought:
Oscar Peterson with the Stephane Grappelli Quartet, vol. 1. Nearly every time I hear Stephane Grappelli, I 1) curse and 2) then think to myself, "Man, Grappelli really is the most swingin' jazz violinist in history." Of course, then I hear Stuff Smith, curse, and think to myself, "Stuff Smith is undeniably the world's greatest jazz violinist!" And then again I'm kind of partial to Ray Nance too. (He was the quadruple threat: trumpeter, violinist, vocalist, and dancer!)
Jimmy Witherspoon & Jay McShann - 24 tracks for $5.00! That's 21 cents a track. How can you not buy this one?
Posted by James at 6:24 PM No comments:

Check this video out:

The singer is Matt Lewis, one of my favorite jazz musicians in Chicago. How cool is this guy, that he can just walk up to some street musicians in a foreign country and sound so good with them?!?!
Matt is often featured--as both a trumpeter and vocalist--with the Swing Shift Orchestra, the knock-your-socks-off big band that plays Thursdays at the Green Mill. I've been out on performance gigs with him many times, and the music he makes is always a pleasure to dance to--he's an amazing soloist and quite the showman as well. Oh and he swing dances too.
Here's Matt's website.
Posted by James at 12:31 PM No comments: