I had the late set at Fizz last night, starting around 11 p.m. after Tim Gault's early set. I felt like my set was a bit stale on the whole. I think I need to shake up my habits a bit.

Back in May, Mary (my wife) and I and some friends participated in a show organized by our friend Reggio "The Hoofer" McLaughlin in honor of National Tap Day. It was a variety show extravaganza at the Old Town School of Folk Music, and the star was none other than the Queen of Swing herself, Norma Miller. The night before the show, she came to Big City Swing for a little story time hour.; then during rehearsal the following day, we got to talk with Norma a little bit. She's really something else. When she's on stage or even in front of the crowd at Big City, there's no doubt in anyone's mind that she's a star performer--man she just knows how to ENTERTAIN people. As the finale to the show, she sang her song "Swingin' Frankie's Way" (here's a video of her performing the same number at the Frankie 95 celebration). My friends and I were all star-struck. 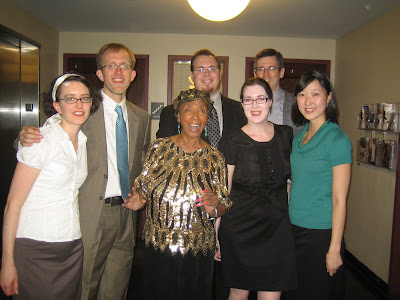 Just got through listening to the new album from the Solomon Douglas Swingtet, called Live at the Legion. I'm very impressed and itching to start spinning it at dances. It's a live recording, so the tunes all have a great energy to them, and they're designed to be dancer-friendly. I'm sure the Fizz crowd is going to dig a lot of the tracks, especially "Splanky," "South," and "East St. Louis Toodle-Oo."

As on the his previous album Swingmatism, Solomon draws on classic jazz tunes from the best bands in history, including many that swing dancers are sure to be familiar with. Solomon arranged all the tracks on the album based on recordings from the Count Basie Orchestra, Duke Ellington, Jelly Roll Morton, and others. He seems to have focused on two different eras. First, there are a number of tracks from the New Testament 1950's/60's/70's period of both Basie and Ellington: tunes like "Splanky" and "I Needs to Be Bee'd With" that I tend to think of more appealing to dancers that like groovy tunes. "Splanky" is taken at a nice, comfortable clip, not too slow, full of energy and featuring a nice tenor sax solo from Galen Green.

The other period that Solomon focuses on is the early swing era, from 1928 to the early 30's, with arrangements like "South" (based on a Bennie Moten tune), "East St. Louis Toodle-Oo" (from Duke Ellington), and "Singin' the Blues Till My Daddy Comes Home" (for which Solomon cites both a Beiderbecke/Trumbauer recording from 1927 and a Fletcher Henderson recording from 1931). It's really great to have some fresh recordings of old tunes like these with good, crisp recording quality. I LOVE early Duke Ellington, but I just can't play the original recording of "East St. Louis Toodle-Oo" at a dance--the sound quality would be too much of a turn-off for most of the crowd. Speculating here, but these choices seem to be following the broader trend among bands (as on George Gee's latest album "If Dreams Come True") of exploring music that was popular during the earlier part of the swing era, and among many dancers who seem to have become interested in a broader range of music (one favorite example: this routine uses music from a 1929 recording by Margaret Webster and Clarence Williams).

All in all, a great outing from the Swingtet, a solid addition to any DJ's book, and an album I'd recommend to dancers for their personal collections--it even includes a BPM for each track. It makes me really eager to hear this group live at a dance...
Posted by James at 4:38 PM 2 comments: