Great night at Fizz last night. It took me for-freakin'-ever to get the sound setup to work, but once that was done, things went pretty smoothly. Last night was also the debut of my new Samsung NC-10 netbook--I'm in the process of transitioning so that I can use it to DJ, since my little powerbook is getting old and is starting to have health scares. More on the new setup later.

Not much to say about this set--it was a light crowd early in the night (everybody was downstairs getting schnockered at the Templeton Rye tasting), and I ended up dancing a lot. By about 10:15, it was starting to get crowded. I kept dancing quite a bit, basically just playing a bunch of music that I liked, trying to vary the tempo and style. Some of the tracks were inspired by my friend Reggio, who is working with me and some friends on a show for National Tap Day. More on that later too. See the setlist below.And here's the bpm frequency distribution and sparkline.

The performance class that Jenna and I taught at Big City Swing over the past couple months finally had their debut at Swinger's Ball last Saturday. They completely rocked it. Here's video:

Battle of the Bands II 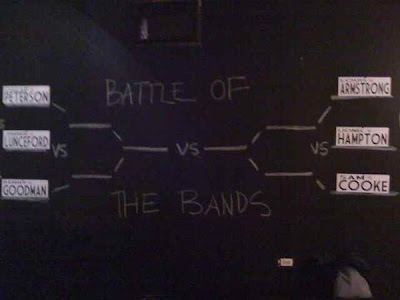 Here's how it went down at the Battle of the Bands at the Galaxie last Saturday: Lippy had constructed an elaborate bracket scheme for the 6 djs in the competition (it is March Madness time, after all). See the bracket above, which was assigned by random draw. For the first round, each DJ has to play a 20 minute set of music exclusively from their chosen artist or band. They are then judged (by audience applause) against the other two DJs in their bracket, and one of the DJs is eliminated. Each of the DJs from the left bracket then has a 15 minute set versus one of the DJs from the right bracket, and only one of them survives (again judged by audience applause). This leaves 2 final DJs, who battle it out trading sets of 2 songs a piece, currying favor from the audience. Cash prize for the winner.

After a beginner lesson and then a little warm-up music, the battle kicked off at 9 p.m. with Doug "Doberman" Hillman representing Oscar Peterson, followed by Chris "The Man with the Middles" playing nothing but Jimmie Lunceford, and then John Joven playing Benny Goodman. Oscar Peterson had another gig later that night, so basically Lunceford and Goodman got a first round bye.

I kicked off the second set of three DJs starting at 10 p.m., representing Louis Armstrong. Here's my first set:
As you can see, I played it pretty safe. I tried to cover a range of styles that Louis Armstrong played, from the popular hits from the 60's, to more straight-up jazz from the All-Stars, to the pop-jazz with Ella (and Oscar Peterson in the backing combo). My set was followed by Dave "Lippy" Rentauskas representing Lionel Hampton, and then Riley "Big Tyme" Wymes going out on a limb by spinning Sam Cooke. The second set was a close call, but Lionel Hampton was eventually sent back the the bench.

The semi-finals started off with Benny Goodman versus Sam Cooke. From a "flow" standpoint, I thought it was a little odd to have two all-Sam-Cooke sets separated by just 20 minutes, but that's how the bracket fell out. Sam Cooke progressed to the finals by a comfortable margin.

After that round of voting, Armstrong was up against Lunceford. Here's my second set:
I opened with I Love Jazz because the announcements immediately prior gave me an excuse to play the longer intro that everyone seems to know so well. I followed up with another solid, mid-tempo song that was still energetic, then kicked it up a notch with a hot charleston number. (Was gonna play my other version of that number, but I thought it would clear the floor to much--it's a rollicking 255 bpm.) I closed out the set with a slower, bluesy number where Louis duets with Billlie Holiday.

Lunceford's second set followed on mine, and included the requisite Shim-Sham, followed the Lunceford Special, during which a jam broke out. For sheer entertainment value, it seemed like a great call--that Lunceford cat sure puts up a tough fight. Armstrong eeked out the victory, and was on to the finals against Sam Cooke.

Finals were a challenge--Riley played two soulful Cooke numbers, which meant I had to transition the room back to a jazz sound. Here's how I followed up:
Honeysuckle Rose starts out sounding like a lazy slow-lindy number, but then eases into the main chorus at a lightly swinging 170 bpm. I thought it worked well as a transition. I followed up with a DIRTY DIRTY blues number that's still in a lindy hop tempo.

Then we were back to Sam Cooke for two songs, and then I had a final two songs to try to bring folks back into Louis' corner. Here's what I chose:
I opened with a slow groovy ballad, trying to appeal to the dancers' sentimental side, and then closed with Armstrong's traditional closer. In retrospect, it didn't work all that well. If I could try it over again, I would have skipped this and gone out in a blaze of 1920's glory with Cornet Chop Suey or I'm a Ding Dong Daddy from Dumas, highlighting the difference between my guy and Cooke, rather than trying to beat Cooke at his own game. Anyways, Cooke came out the winner, so Riley finished out the night.

All in all, a very fun evening of dancing, and an interesting challenge for the DJs. I thought the bracket system worked really well, and forced all the DJs to select songs very strategically. Instead of just blowing the best 20 minutes of Lunceford that there is, Chris had to spread it out over several sets so that he could remain competitive. Hopefully the format will be preserved for next time. Hmmm.....now to figure out who I should represent in the next battle.....
Posted by James at 4:35 PM 2 comments:

Last night was pretty crazy. Two lessons (Mary and I did a charleston lesson downstairs, Jenna and Max did an intro swing lesson upstairs), two floors of dancing (me downstairs, Nathan upstairs), lots of out-of-town friends dancing for us. It was a good crowd, about the same as last month is what Jenna reports, but the atmosphere was maybe a bit more relaxed because people were spread over two floors.

I dj'ed from 9 until a few minutes before 10, then my friend Jason Zabinski from Minneapolis spun for about an hour, then I took over again around 11:15 to close out the night. Having Jason dj was a treat--pretty much everything he picked out made me go "Ooooh this is a great track! How come I never play this one?" Plus I got to just dance instead of running back and forth from my computer. Here's my set list: